You are here: Home / Memoir / The Kid on the Green Bike By Wali Mailatyar 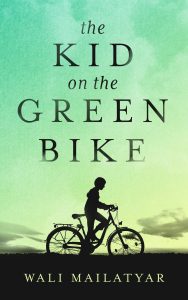 About The Kid on the Green Bike By Wali Mailatyar

A Gripping True Story of Escapes, Rescues, and Fighting for the American Dream

Wali Mailatyar was 15 years old, and he had a choice to make. Either get conscripted to fight in the bloody civil war between the communists and the mujahedeen devastating his country or leave his home and family and possibly never see them again.

Wali ended up escaping his homeland and embarking on a long journey that would eventually lead him to stand for election in Arizona as a candidate for governor.

This book tells how Wali fought against the odds to escape the horrors of war engulfing his homeland and to find the American Dream.

The Kid on the Green Bike is more than just another immigrant story—it’s part action thriller and part family drama.

Filled with cinematic scenes and heartbreaking stories of love and loss, this book shows all of us that the American Dream is still very much alive—if you’re willing to fight for it.

If you love stories about underdogs beating to odds, the triumph of love, or the importance of family, this book is for you.

Just like coming to the United States for the first time changed the course of Wali’s life, this book will change the way you see the world and America’s role in making it a better place.

Wali Mailatyar is a business owner, family man, published author, a survivor of perilous journeys, and challenger of obstacles. The second youngest of eight children, Mr. Mailatyar grew up in peaceful Afghanistan with his hardworking mother and father until more danger began to haunt the fragile peace. From there he began an epic journey from the dangers of his homeland to the unknown of America. Mr. Mailatyar defied the odds, earning degrees in accounting, opening, and managing a successful accounting business, starting a family, and exploring his innate leadership abilities to run for Arizona Governor. His goal is to use his past experiences of surviving oppressive regimes and fighting back against corruption to bring back honesty, integrity, and equality to Arizona—and beyond. He’s made it his mission to fight for equality and defend those who are unable to defend themselves. When he isn’t running his business or working to make Arizona a better place, he’s spending quality time with his wife, children, two dogs, and his cat in the beautiful city of Phoenix, Arizona.