You are here: Home / Fiction / The Last Italian: A Saga in Three Parts by Anthony Desltretto 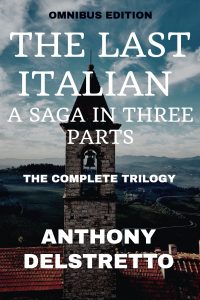 About The Last Italian: A Saga in Three Parts by Anthony Desltretto

Share the triumphs, tragedies, conflicts, and dreams of three generations of characters joined by common blood and intertwined destinies. The action spans continents, from Italy’s great estates to its wild, lawless mountains, across colonial Africa’s desperate sands into the deep mines of America, over Russia’s vast steppes to the timeworn cobblestones of the village piazza. As the family pits its nerve and ambition against life’s hard demands, inscrutable Fate forever stands ready to abruptly intervene.

I. God’s Teeth (1882-1890) Carlo goes out to catch fish like he does every morning. What he brings back that day changes everything. Ettore sets out to build the King’s Road through the mountains near Naples. A band of cutthroat brigands takes lethal exception.

II. Fate’s Restless Feet (1911-1913) Brothers Gianni and Renzo join Italy’s glorious conquest of Tripoli. Engulfed by slaughter instead, it takes Angela’s courage to offer a chance at salvation – five thousand miles and an ocean away.

III. Death to the Wolf (1942-1945) After Italian army lines shatter near Stalingrad, Donato learns exactly who the real enemy is. In Italy, Regina stands with her patriarch father as the family, divided like la Patria itself, must face its moment of truth.

The author was raised in blue-collar Detroit, Michigan, in the 1950s, followed by a career in school admnistration that spanned forty-two years. He researched and wrote “The Last Italian: A Saga in Three Parts” – his debut novel – over a period of eighteen months, publishing the current edition in 2020. Anthony and his wife both hold dual Italian and U.S.citizenship and live in the western USA.