You are here: Home / New Books / The Military Cop 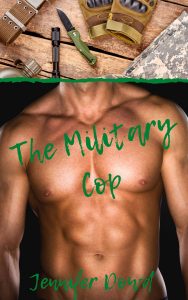 About The Military Cop:

Ben De Luca, a Captain and Criminal Investigation Special Agent for the U.S. Military, has just been told that a United States Army soldier has turned up dead on the streets of Washington, DC, and it looks to be a hate crime against the U.S. Military. De Luca is assigned to partner up with a Senior Detective with the Washington Police Department. Ben is not happy that he’s been assigned to work with a civilian cop, but he is surprised when he meets her for the first time, mostly because she is stunningly beautiful. He immediately wants to take her to bed and find out how amazing she is.

Harmony has been assigned to a military cop for a homicide investigation and she vents her frustration at her boss, but has been given her marching orders. When she meets Ben for the first time, she thinks he is an arrogant alpha male who looks like he just stepped out of the pages of G.Q. Magazine. But her powerful attraction to Ben has her intrigued.

Will their intense mutual lure to one another get in the way of them figuring out who killed a soldier on American soil?

Author Bio:
Jennifer Dowd is a writer, photographer, painter and author of the new novel ‘The Prophecy, a new Kids Series called Let’s Explore and several romance books which are all available on Amazon. Jennifer has been a lifelong writer and first began creating other worlds and characters at a very young age. She lives and works in beautiful British Columbia.