You are here: Home / New Books / The Secret of the Carter House (The Paranormal Detectives book 1) by Emily Grace 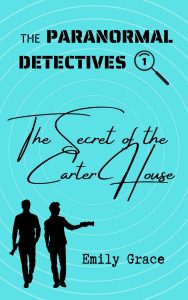 Charlie Parker has believed in ghosts ever since the first paranormal experience he had as a child, but his best friend, Mateo Jones, isn’t convinced. Even after many investigations of haunted sites around England, he still refuses to believe in the existence of anything supernatural.

Charlie is desperate to prove to Mat that ghosts exist. So, he decides they should return to his childhood home in the hope of finding some paranormal evidence good enough to change Mat’s mind.

The house is haunted by the ghost of Pearl Carter, a young woman who died 76 years earlier in what was believed to be a tragic accident.

But does the house hold a secret proving there is more to Pearl’s death than what meets the eye?

Mat and Charlie are about to find out, along with the thousands of people subscribed to their YouTube channel, The Paranormal Detectives.

‘The Secret of the Carter House’ is the first book in ‘The Paranormal Detectives’ series.

Emily Grace is a 23-year-old YA author from the North East of England, where she lives with her parents and older sister. She has been writing stories for most of her life, but has only recently decided to share them with the rest of the world. When she isn’t writing, she enjoys reading, playing board games, watching murder mystery shows, hanging out with her best friend, and has a keen interest in mathematics. Her debut novel ‘The Secret of the Carter House’ was released June 2021 and is the first book in ‘The Paranormal Detectives’ series.