You are here: Home / Fiction / The Ticket 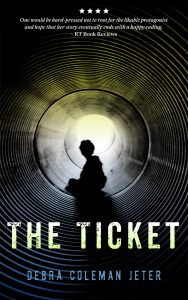 Tray Dunaway, an ordinary teenager from a poor Southern family, longs to become part of the popular clique at school. Her mother, Evelyn, lies in bed most days with her bipolar tendency toward extreme highs or desperate lows. Meanwhile, Tray’s grandmother Ginny, still grieving over the loss of her husband, would love to move out and find a place of her own. Maybe even a bit of romance to replace the loss she feels. But given the sorry state of the family’s finances that’s not possible.

Then the Dunaways’ luck changes. Or so it seems.

Tray’s father drives a down-and-out friend of the family, Pee Wee Johnson, to Hazard, Illinois, so Johnson can buy lottery tickets. As a gesture of thanks, Johnson gives a ticket to Tray’s father. And what do you know? The Dunaways’ are suddenly rich.

When Johnson demands his cut of the winnings, Tray’s dad refuses. As Evelyn’s illness spirals toward madness, Johnson threatens the family. Now, what seems like a stroke of good fortune becomes a dangerous game of life and death for Tray Dunaway and her family.

Debra Coleman Jeter has published both fiction and nonfiction in popular magazines, including Working Woman, New Woman, Self, Home Life, Savvy, Christian Woman, and American Baby. Her first novel, The Ticket, was a finalist for a Selah Award, as well as for Jerry Jenkins’ Operation First Novel. Her story, “Recovery,” was awarded first prize in a short story competition sponsored by Christian Woman; and her nonfiction book “Pshaw, It’s Me Grandson”: Tales of a Young Actor was a finalist in the USA Book News Awards. She is a co-writer of the screenplay for Jess + Moss, a feature film which premiered at the Sundance Film Festival, screened at nearly forty film festivals around the world, and captured several domestic and international awards.