You are here: Home / Action & Adventure / The Time I Saved the World by Jes Drew 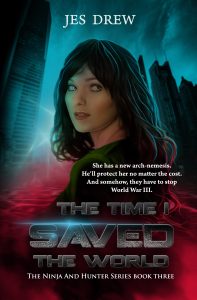 About The Time I Saved the World by Jes Drew

Charisa O’Dell has enough on her plate trying to live a normal life despite her superpowers. But when a mysterious menace acquires superpowers of his own, she fights back. However, even with Hunter and her dad by her side, she is sorely outnumbered. And Hunter just complicates things more…

When the menace sets his sights on the world, they face a global apocalypse with only one hope. A hope that could destroy that which Charisa holds most dear. As she faces coming of age, a countdown, and a choice, she knows very well that she might not survive an attempt to stop the menace. And even if she does sacrifice everything, will it be enough to save the world?

This is the epic finale to the teenage superhero action-drama where ships burn or set sail, the world either ends or doesn’t, and one young woman faces her greatest fear and her stalker to save everyone possible in what may very well be her last stand. With or without her first kiss . . .

Jes Drew is the author of the Ninja and Hunter trilogy, the Howling Twenty trilogy, the Kristian Clark saga, the Castaways trilogy, The Dystopian Takeover trilogy, The Clockwork Faerie Tale Novellas, The Summers of Yesteryear series, Legends of the Master Spy, The New ESE Files, Tales from Parallel Worlds, Genie and Serena, PIs, and Accidentally on the Run. Her true love is Captain Steve Rogers, and there is a possibility that she may or may not be a superhuman, but she hasn’t discovered her powers. Yet. Also, she might be a spy, but that’s classified. You can contact her at author.jes.drew@gmail.com.