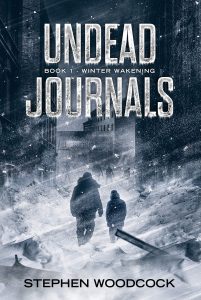 Mike used to work in the city. Now he’s one of the survivors; like-minded strangers, each keeping a journal of the fight to live and their search for loved ones.

Melanie is a self-employed beauty therapist from the Midlands; Dirk, an American expat from Nashville; Harley, a rebellious young lady from Stoke; and Donald Eberlee – an eleven-year-old boy from Enfield, near London.

Each must endure the bleakest British winter in living memory while evading an ever-increasing horde of the infected population, known as, “The Diseased”. Their best hope lies to the north; an arduous journey along icy roads filled with abandoned vehicles, rotting corpses, and danger at every turn. Along the way, they must find food, shelter, and maybe each other.

Together, they might just make it to Spring, and survive the Winter Wakening.

Stephen Woodcock was born in Wolverhampton, in the UK. Undead Journals – Book 1: Winter Wakening is his debut novel, and is the first book in the Undead Journals series. Book 2 is due to be released in 2022.
Stephen is a family man and has a soon-to-be teenage son and long term partner. As a family, they enjoy walking, gaming, movies and writing. Stephen very occasionally works in the TV and film industry as a supporting artist, and has recently worked an upcoming comedy for Apple TV.