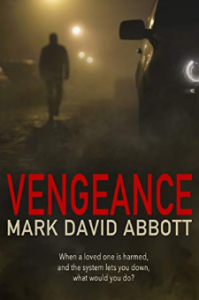 When expat John Hayes’ wife is brutally attacked while on a posting in India, he’s forced to take matters into his own hands.

John Hayes’ life is perfect. He has a dream job in an exotic land, his career path is on an upward trajectory and at home he has a beautiful wife whom he loves with all his heart.

But one horrible day a brutal incident tears this all away from him and his life is destroyed.

He’s faced with a choice. Should he accept things and move on with his life or take action and do what the authorities won’t do for him?

What would you do?

What people are saying:

“…our hero is an ordinary man, not some super ex SAS person.”

“A 5 STAR Story about someone just like us, our neighbors and friends, and what you will go through when your partner in life is ripped from your side.”

“This is my first time reading this author, but I now intend to read everything he has written.”

“It’s nice to see a hero who is like the rest of us. No super powers or a secret agent. Highly recommend this to anyone who likes action books.”

Mark David Abbott was born in Cyprus but spent most of his formative years growing up in New Zealand. A love for travel has meant that he has spent much of his life living and working in different countries around the world and currently calls India home.

Mark has worked variously as a barman, a factory hand, a supermarket shelf stocker, and a real estate salesman, but now devotes his time to writing and traveling.

Mark is a keen runner and in between runs is slowly building an impressive collection of Gin.

The John Hayes books are a series about an ordinary man put in extraordinary situations.