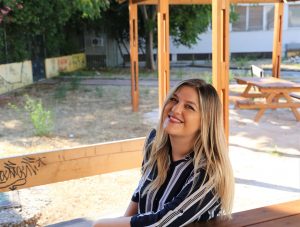 Tell us about yourself and how many books you have written.
My name is Marilena Pappa, I’m a Greek writer, living in Athens.
I was born in 1988 and studied Public Administration and Communications and Journalism. I have published 7 books (children’s fiction, poetry and literature for adults) in Greece and Cyprus, plus my new one “James & The smiling planet” that has been released worldwide. I was nominated for Best Children’s Book in Cyprus´ State Literature Awards in 2013.

What is the name of your latest book and what inspired it?
My latest book and my first one in English is “James & The smiling planet” and I’m super excited about it! I originally wrote this book in 2009. Back then I was madly in love, but there were so many barriers that wouldn’t let me express my feelings. So, I transformed everything I was feeling to a story of magic, paint, stars, a whole new universe, making a planet smiling – hoping that the planet would smile back at me (eventually).

Do you have any unusual writing habits?
Ever since I was a little child I was watching people. How they talk, they behave, the smile, they cry. I remember my mother taking us (me and my brother) to the playground and me not wanting to play. I would prefer sitting next to mum’s friends and listen to their stories, exploring their faces and making my own stories. I do the same thing until today. I believe that every person I meet has a new story to tell me. I also tend not to read anything at all during the period I’m writing a book – I don’t want anything to distract me from my story. Ideally, I would prefer to be detached from the world during this period (but this isn’t easy to be accomplished). So, I mostly write during the night when the world is sleeping and I can feel all by myself!

What authors, or books have influenced you?
So many! During my high school years I was influenced by the Greek poets Kostas Karyotakis, Giannis Ritsos and Odysseas Elytis. There were days that I would read their poems over and over again. Later, I discovered many Russian writers. I absolutely love Nikolai Gogol. During my university years one of the books that affected me is “The Fall” by Albert Camus.

What are you working on now?
I have a draft story in my mind, but it’s too soon to tell whether this will be transformed into a book. I only know that I need to write about love. My previous book that was released in Greece (following also my previous books) was dark, was related with my inner need to explore the connection between life and death, the circle and meaning of life. During this writing period I was feeling that I was walking blind through a dark tunnel, where I had to rediscover my self, reevaluate life. I think I’m out of this tunnel. Out in the light and I need this feeling to be reflected to my next writing steps.

What is your best method or website when it comes to promoting your books?
I think the best method to promote your books/ your art/ anything is always to stay connected with your audience. The communication among writers and readers is priceless.

Do you have any advice for new authors?
The same thing that I’m saying to myself and the key message that derives from “James & The smiling planet”: Keep going.

What is the best advice you have ever heard?
When I was in high school my father told me that I shouldn’t listen to anyone. He told me that I should get to know myself better: my powers, my flaws. So this is what I did; Never heard of anyone, always knowing who I am and where I’m going (even when I walking through dark tunnels).

What are you reading now?
Today I started reading the book “El amor en los tiempos del cólera” (Love in the Time of Cholera) by Gabriel García Márquez. Something tells me that I’m going to love it.

What’s next for you as a writer?
I want “James & The smiling planet” to reach as many children as possible around the world. To inspire them, encourage them to accomplish their goals, make their planets smiling.

What is your favorite book of all time?
It’s “The Monogram” – an extended love poem by Odysseas Elytis. It’s available both in Greek and English.